Real togetherness is an elusive force which is painstaking to achieve but euphoric to experience. It is the process of community being formed, new moments being shared and a singular goal being pursued. It is complemented by self-reflection, which reveals to us that we are best defined as being a part of wide, inclusive community than closed, fixed identities. We are liberated by togetherness. This is the Less Talking ethos.
by GUEST CONTRIBUTOR Nov 1, 2022

Less Talking is a series of events used to explore these ideas. I repeatedly ask: ‘How do you best bring people together?’, ‘How do you make them conscious of their togetherness?’ My answers change each time. The events act as projections of these answers into physical space and each event adapts itself to try and find a better answer so it is also a research project, searching for a truth.

Less Talking Brighton photographed by Josue Dedji
I’ve held ‘Less Talking Brighton’, a multi-sensory club night at Soho House’s Brighton Beach House; and ‘Gabriel Dedji presents… Tamilore Awosile’, a live jazz soirée at Crouch End Soho House. They were vastly different in their structure and in their results. Both events were structured to offer a common journey for those present upon which there was room to reflect upon their feelings. They danced, they enjoyed, they thought, and all of these things are necessary to Less Talking. They allow personal reactions to blossom into shared understanding, which is how the ethos grows from a single event into a continuous community.

I also run events with the Black Head Students’ Network– a student leadership organisation, and The Books Dem– a black diaspora-centred creative agency. This summer, the BHSN held a talent show at Brixton Soho House; The Books Dem held an open mic concert at Soho House’s Shoreditch Studio and a black literature cookout at On.Road in Shoreditch. I used these to refine my understanding of the Less Talking Ethos as well.

My friend Tamilore Awosile– founder of the Black Head Students’ Network and student prodigy- interviewed me to learn more about these experiences and the Less Talking ethos:
Tamilore: What was the inspiration behind the Less Talking ethos?
Gabriel: I had been thinking about togetherness and human emotions a lot at the end of last year. There were two moments in particular that encouraged me to think about how to explore them: Dele Sosimi and Lokkhi Terra’s ‘Cuban Afrobeat night’ at the jazz café last December and Henry Wu’s album listening party in May. These events really shaped my understanding of how different types of music bring people together. There was a lot of house and jazz at my events as a result. But Less Talking isn’t tied to being just a music event. I’m interested in exploring many different ways to bring people together.
Tamilore: What was your favourite moment from your events?
Gabriel: There are so many… I’ll say two. I think the main one was at the end of ‘Gabriel Dedji presents…’. You had just finished performing and everyone was proud of you. DJ Dan Dans was great, she was playing afrobeats so everyone was dancing together and celebrating. You could see the real sense of togetherness.

Before I held the Less Talking events, I published two short stories on my blog which capture the Less Talking ethos. Less Talking #001 was a story about self-reflection and Less Talking 002 was a story about togetherness. This is a spoiler but at the end of Less Talking #002 everyone forms into an amoeba substance: they’re all just one singular entity. The end of our event felt like the same thing. We had reached that level of oneness. I asked people to write their thoughts and feelings on pieces of paper that I would keep and the reflections that they wrote all really emphasised this feeling. I had a similar moment at Less Talking Brighton. I had performed an improvised jazz set, which had an amazing reaction. 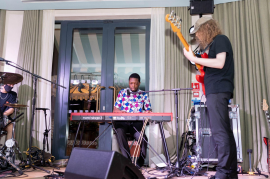 The other moment that I wanted to speak about was The Books Dem’s cookout. We held some workshops there where people shared their poetry and their perspectives on topical subjects. This was oneness being created through a shared sense of expression and learning. It was really moving.

The Books Dem’s cookout
Tamilore: Yeah, I remember the end of ‘Gabriel Dedji presents…’ and I can definitely see what you mean- that we were all one. You mentioned the notes that you asked people to write… What did you do with them?

Gabriel: I had this idea for a painting where I would burn the notes and mix the ashes with paint to spread on canvas. In this way, our thoughts and feelings are preserved together, but it’s also a reminder that we don’t need words or physical symbols to validate our feelings. I called the painting ‘Pentecost & The Empty Tomb’ because Pentecost is a story in the bible where a group of people are together in one place and they’re all speaking in tongues, so they understand that their words don’t mean anything apart from evoking this spirit of togetherness.I had put all of the notes into a cardboard box and I called this the empty tomb because this ties into an idea I have about empty labels where things are able to live more if we define them less. I took all of the notes out of it and now it’s empty.
[read my essay on this here] I’m putting the art piece on display exclusively at future Less Talking events. I made a video of me making the piece and I called it ‘It Was Never Meant To Be Me’ because I read some poetry during ‘Gabriel Dedji presents…’ which I had printed out onto pieces of paper and I realised that I had to burn those pieces of paper too even though it wasn’t the plan. I couldn’t allow my poetry to be a spectacle that was separate from everyone else’s emotions if I wanted to show that feeling of togetherness. That video was me grappling with my own individualism. I rushed into the artist’s green room at the end of the show and whilst everyone was dancing together, I was recording a voice note on my phone repeating the phrase ‘It was never meant to be me’. I played this recording on loop throughout the video.
Tamilore: I know this also links to the fact that you don’t like stages because you want everybody to be equal and on the same level. Very interesting ideas… You’re a multi-hyphenate creative who does a lot of different things. How does Less Talking fit into the rest of your career?
Gabriel: Less Talking is completely different from everything I’ve ever done. I wrote a book and I make music a lot. These are very static things that exist in fixed ways. Less Talking is ever-growing. It’s also different because Less Talking includes more than just me. At Less Talking Brighton, I was showcasing art from people like Thom Georgeson who makes paintings using hoovers and codes computer programmes to draw by themselves; we also had BXKS, an amazing rapper and a real star. I want to continue showcasing talent like this.

Gabriel Dedji and Prp.le– one of the opening acts at Less Talking Brighton, photographed by Josue Dedji

Separately though, I spent the whole of lockdown dwelling on images of isolation and human suffering. I would constantly think of the myth of Sisyphus- an ancient Greek myth where a man is condemned to a fate of pushing a boulder up a hill for eternity; Kafka’s ‘Metamorphosis’, a story about a man who became a cockroach and wasted away in his room; and Soren Kierkegaard’s ‘The Sickness Unto Death’ where he uses the biblical story of Lazarus as a metaphor for human despair. All of my work was characterised by these images of individualism and despair. I’ve come out of lockdown with a large collection of poetry and multiple albums’ worth of music that all centre on these themes.

This is the big contrast to all of that. I spent a lot of time later exploring togetherness and building community. I’m finally expressing that.
Tamilore: What’s next for you?
Gabriel: I have a lot of things planned for Less Talking, which I’ll be able to announce soon.
Follow me.
It’s also Black History Month so I’m going to be going into schools to lead workshops and assemblies with The Books Dem and The Black Head Students’ Network. We’ll be sharing a lot of content this month. The goal is really to continue creating community, so I have a lot of things planned to further this goal.
Less Talking Brighton

This is a piece written by Gabriel Dedji, an author and musician from North London.