HOW ‘BEAUTIFUL’ IS THE GAME OF FOOTBALL FOR BLACK WOMEN? Research states that around 61% of women have never watched a football game and numbers for black women are considerably lower, but why?
by GUEST CONTRIBUTOR Aug 23, 2022

Final whistle! As the camera pans the roaring crowd at Wembley stadium, zooming in on the happy faces of 90,000 screaming, jumping fans, I join them in my living room clapping and chanting for the lionesses. But as soon as I stop to take a breath (everything feels like cardio in your 30s), I refocus on the crowd on the screen.

England’s women’s team have just won the 2022 Euros tournament. The first time that the trophy comes home – ever! The first piece of silverware in the cabinet since the men’s team won the world cup in 1966… and yet here I am, distracted and disgruntled by the lack of black women I see in the crowd.

Being a black woman myself, this is not a new point of ponder. I am constantly reminded of my otherness in the workplace, on the tube platform and at the new fancy gym that I joined to try and get over my aforementioned cardio issues, but for some reason, this lack of diversity in the crowd hit me hard. 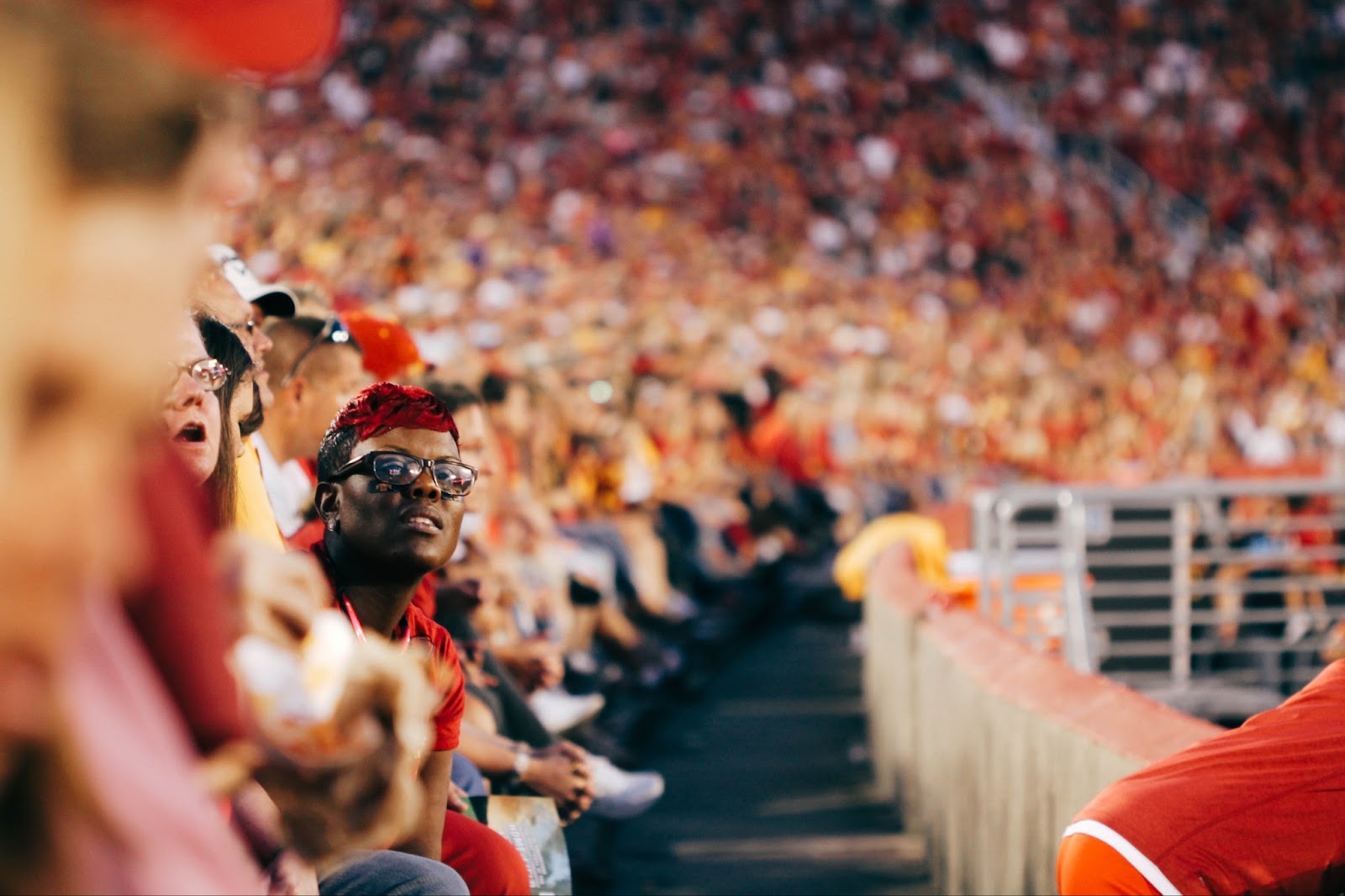 Football is the foundation of many bonding experiences. We’ve all seen how groups of strangers can turn into the closest of friends during the 90 minutes of a game, hugging and spudding each other every time the ball hits the back of the net but despite the commonality that the sport provides, black women appear to be kept on the sidelines of these celebrations.

According to Statista, of the 13.9 million fans in the stands at Premier League games in 2020, only 19% of these were women, and I’m sure that it is no surprise to learn that women who identify as black make up an even smaller percentage of this already marginalised number.

A wise woman (me) once said that statistics are the catalyst of curiosity, so once I read these, I set off on a philosophical rampage, trying to figure out… the figures, and my first pit stop was the undeniable tension between black women and black footballers.

The perceived resentment between the two has been thundering tweet storms for years, with often heated discussions of women calling black ballers out for not dating and more importantly, marrying “their own”. You only have to scroll the social media pages of  Premier League stars to  see where the argument stems from.

Personally, myself and the women I know have never cared about who players are sleeping with but as with all hot takes in the echo chamber, it seems that the angriest typers are the ones who dominate the narrative. However it would be unfair to not acknowledge the reality and the potential of the animosity causing separation.

After all, how can black women love football when they feel that the players don’t love them back?

Another contributing factor is the strenuous cultural expectations of black family dynamics. Though gender lead constrictions are present in households of all races, black communities are seen to be the biggest sufferers. Little boys are taught how to kick ball, forced to watch ball and then encouraged to pass the ball to their own sons, continuing the play. Little girls on the other hand, are taught how to be good wives who prepare a plate of hot wings in the presence of their enemies – or in this case, their husbands and their boys who sit huddled around the TV shaking their fists at 22 men every Saturday.
Whilst the men are away, the women must stay… in the kitchen, trading cheers and beers for cooking oil burns.
But what about the women who manage to skilfully nutmeg these cultural shackles and break free to the goal line, unashamedly expressing love for “the beautiful game”? Well, they’re often labelled as ‘Pick Mes’, told that any genuine interest they have in the sport is fuelled by a desire to impress men, which is enough of an insult to make any woman downplay or down-right hide her love of football.

In 2022 we’ve progressed enough to understand how important it is to encourage men (especially black men) to seek safe spaces and self-help to better their well being. But historically, the expectations of hyper masculinity were far less supportive. There were no podcasts, or clubhouse forums or whatsapp group chats to help to decompress important issues and the self care movement was almost explicitly seen as a feminine experience until the later years of the last decade. But what men have always had, is football.

Crowded together laughing off the stress of systemic racism, cultivating safe spaces to be free, joyful and playfully aggressive without ridicule. A lot of male escapism has been built around the sport. Even the opposing soldiers of WW1, played football on Christmas day as a way to evade the hardship of war.

Football is a sacrament, protected by those who revel in the ritual and reverence it serves. These gatherings are not for any and everybody, this is a shoes off and Wudu water type beat. An invitation from a father, son or boyfriend is the holy trinity needed to get in. But it is time to do exactly that. The joyous pride that you feel when your team wins is simply unmatched and black women deserve to get in on those endorphin highs. But not only that, if men use football as safe spaces to be free, joyful and playfully aggressive without ridicule then let’s have more women in these spaces too. Let’s get close and feel safer together. FOOTBALL
Arts & Culture HOW ‘BEAUTIFUL’ IS THE GAME OF FOOTBALL FOR BLACK WOMEN?
by GUEST CONTRIBUTOR AUG 23, 2022